This report was written and translated by City Cast Chiba. 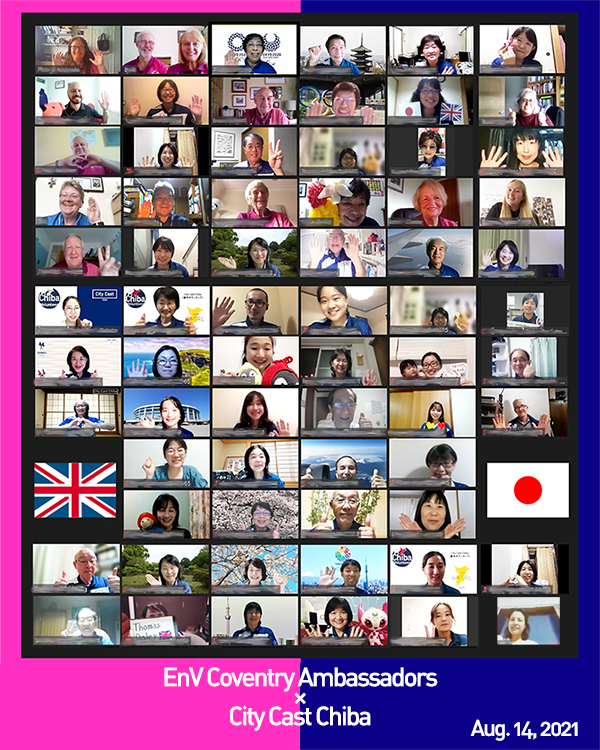 City Cast Chiba, Olympic and Paralympic city-volunteers, ended up having activities for Tokyo 2020 mainly remote volunteering such as online. While the Olympics started in hardship, an online talk session with “Coventry Ambassadors” was held in order to look back on the former half of Tokyo Olympics and to enrich the rest of the activities and further volunteering journey. Coventry Ambassadors are volunteers for London 2012 and continue their activities even after the Olympics.
This project was all done by City Cast Chiba from planning to management and about 70 volunteers from Chiba and Coventry took part in on the day of the event.

We discussed what we learned through the experiences as “city-volunteers”, our common position. It made a good opportunity to recognize the value of volunteering and get inspired for the upcoming activities.

To provide opportunities for international exchange for the city-volunteers and to share the values and knowledge of volunteering during the Olympics and Paralympic games period. 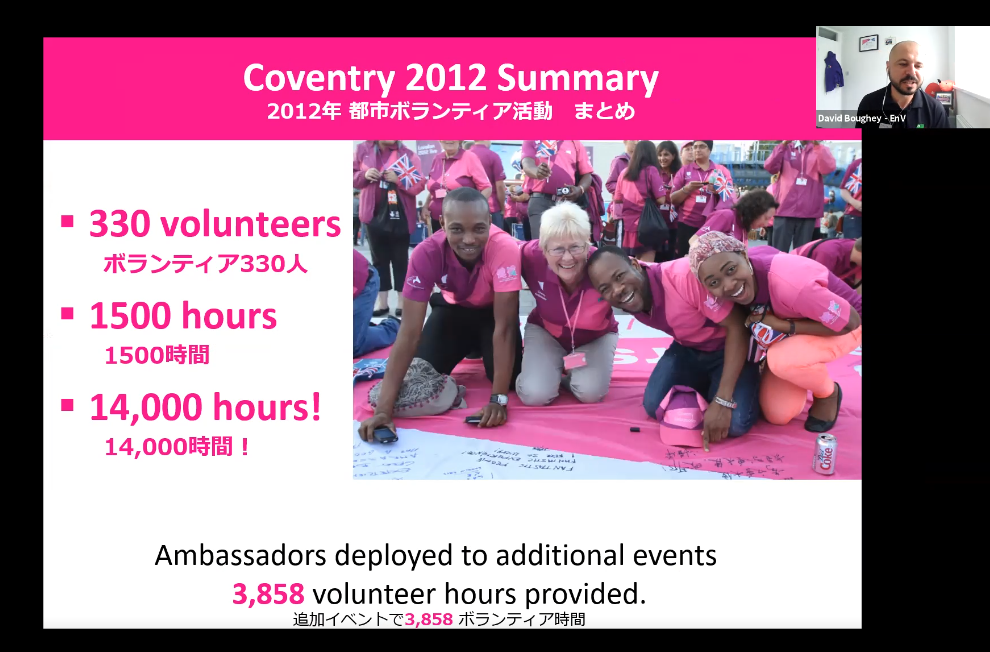 I was in charge back in 2011 to recruit, train and deploy over 300 local volunteers to support Olympic Game in Coventry. Today I manage a community organization which were set up following the Games to grow and sustain the 2012 host city volunteer program in Coventry. During the London 2012 Games, Coventry was host city for Olympic football competition.

We received a visit from Chiba government officials to Coventry in 2017 and as a part of visit we were able to guide them around football stadium which was Olympic venue of Coventry in 2012.  Following the visit to Coventry, I was invited over to Chiba in 2018 to present a story at the recruitment guidance of City Cast Chiba, and in 2019 I was invited to return with two of our Coventry Ambassador volunteers to deliver some training to City Cast volunteer members.

Coventry is based in Central England. It is a ninth largest city in England and is approximately 95 miles from London. Coventry is known for which medieval history, Cathedral, and automotive industry.  It’s one of the fastest growing cities in the U.K. and has a large population of students which 2 award winning universities in the city.  There are significant number of migrants added to the population of city and Coventry is internationally known as a welcoming city of peace and reconciliation.

Coventry Ambassadors
Host city volunteer project aims were, to provide frontline visitors welcome to enjoy the Games in Coventry, and also, to ensure the visitors’ experience the highest standard by providing with the local knowledge, to keep the lasting positive impression on those visitors.
And importantly from the very beginning, there was aimed to provide a lasting volunteer legacy for the city, and we are proud that we are still sliding and continuing to volunteer stay nearly 10 years.

There were many voluntary hours contributed by Coventry Ambassadors during 2012 and total of 14,000 hours were provided over the Game days and more additional hours of supporting relating events.

It is ensured that the legacy was provided by the volunteers themselves who personally gained from its experiences of volunteering and all team to continue after the Games ended. And since then, there has been brought of hosting the international events in Coventry.

Coventry was also awarded as European City of Sports in 2019 and we were due to host Australia vs Scotland Rugby League World cup for this year October but recently this has been postponed due to Covid and we hope that it will return next year instead.

And like yourselves, unfortunately volunteer activities have been destructed due to Covid and pandemic and during period of the lock down we tried to keep in touch over cause like this using Zoom. And during that we also asked our volunteers to send the picture of word of how volunteering as a Coventry Ambassadors, and we put together which include words of being proud, feeling values, and also feelings of joys as well. 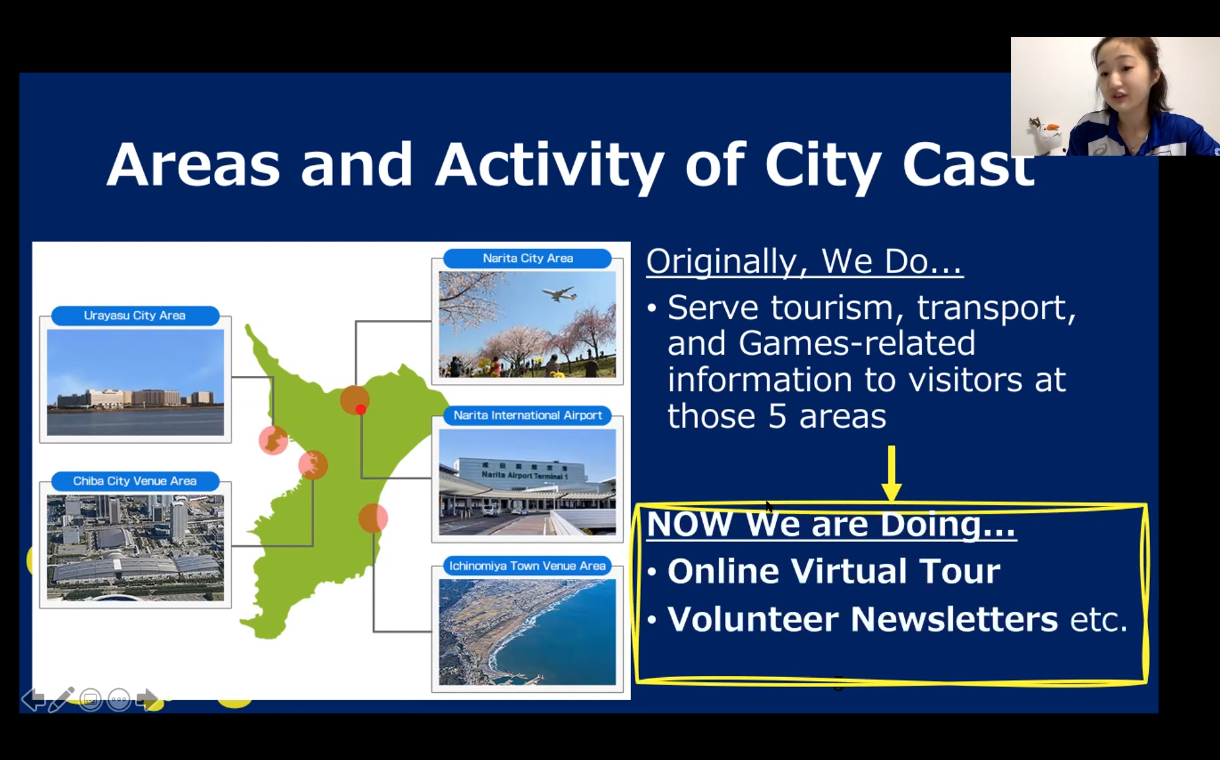 While there are many attractive things in Chiba, today I would like to introduce you to Chiba's "food culture" throughout the four seasons of the year. First, an overview of Chiba. Chiba is located in the east of Tokyo, facing the Pacific Ocean, with a population of 6.3 million, and is the sixth largest prefecture in Japan. Chiba is also an agricultural land blessed with nature.

City Cast Chiba
Next, about official volunteers in Tokyo 2020. There are two main types of official volunteers at the Tokyo 2020 Games: games-volunteers called “Field Cast” who support the operations of game events at the venues, and volunteers in towns, city-volunteers called “City Cast” who serve visitors by providing information on tourism, transportation and Games-related guidance throughout the duration of the 2020 games.
"City Cast Chiba" was initially supposed to do such activities. However, we had to stay home due to the pandemic, and instead, we dedicate in remote volunteering such as holding virtual tours for foreign guests issuing newsletters, SNS and so on.

Specialties of Chiba
Thanks to fertile soil and rich sea, we could have farm produce and fresh seafood. We would like to introduce some of Chiba’s specialties for each season.
In spring, people look forward to the appearance of a bamboo shoot. Bamboo shoot digging and eating a fresh bamboo shoot is sure to be a memorable experience. Fresh bamboo can be eaten raw like sashimi, or as tempura, deep fried, or with steak. Japanese strawberries are famous for their sweetness and size. You can enjoy strawberry picking while comparing the taste of different kinds of strawberries.

Summer is the time to fish abalone, and you can try out different style of cooking that use fresh abalone. Summer is also the season to harvest fruits. Chiba is the No.1 producer of pears and the second largest producer of loquats.

In Japan, autumn is the season when most produce is made. Fishing boats with full of Ise lobsters come back to the port one after another. Chiba is a well-known producer of sweet potatoes and peanuts. You will never forget the sweetness of a baked sweet potato once you bite into it.
Winter is the most suitable season for hot sake. Though we enjoy not only hot but also cold, depending on the season. We have traditional sake brewery manufacturers in Chiba. We say Chiba’s sake is fragrant and clear taste. In these days, we heard that sparkling sake is popular among British tourists in Japan.

Finally, we introduce about “Matsuri-zushi.” It is a kind of sushi and has been inherited in Chiba as a traditional dish. Firstly, we cook sushi rice. Prepare some colorful ingredients such as baked egg, simmered carrots etc. Roll the with the bamboo rolling mat. Spread the rice on the dried seaweed sheet and roll by using the bamboo rolling mat. Then sliced, finally, picturesque cross-section is appeared. “Matsuri” means “festival” in Japanese and we traditionally make this type of sushi on festival days and we also make them to celebrate a birthday, wedding, graduation and so on. Now it’s a party time with Matsuri-zushi! 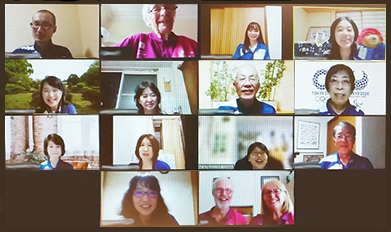 Comments shared in Part 1: Stand-out athletes and moments throughout the Olympic games

Discussion in Part 2:What have you gained through the Olympic and Paralympic volunteer experience? - volunteering in a COVID-19 pandemic -

Feedback from the participants

Total satisfaction about the event (Maximum 5): 4.3

Following comments are some of the answers from the feedback form.

Reason for the evaluation

Message for each volunteer group

Through the discussion, both volunteer groups could achieve the goal of the session to share the value of volunteering. Through this review, we would like to continue to discuss the future of City Cast Chiba.