Exchanges with Düsseldorf in 2019

Since 2005, Chiba Prefecture and the City of Düsseldorf, Germany, have been engaged in exchanges in various fields, such as business, music, sports, and academic research. A variety of organizations participate in these exchanges, which include dispatching delegations back and forth. On May 25 2019, the Governor signed a partnership agreement between Chiba Prefecture and the City of Düsseldorf. This article showcases exchange achievements in 2019 (Title of each person as at the date.)

Governor Morita visited Germany and the Netherlands from May 23 to 29 with YOSHIMOTO Mitsuru, Member of the Chiba Prefectural Assembly and its 72nd Chairperson. The Governor signed a partnership agreement in Düsseldorf, a city with which Chiba Prefecture has been participating in active exchanges for 14 years. He also took part in “Japan Tag”, a large Japanese culture festival in Düsseldorf to disseminate Chiba Prefecture’s appeal.

Opinion Exchange with the Mayor (May 24)

The Governor held an exchange of opinions with Thomas Geisel, Mayor of Düsseldorf, and Iso Masato, Consul General of Japan in Düsseldorf, regarding how Chiba will continue its exchanges with the city after signing of a partnership agreement. Governor Morita and Mayor Geisel expressed their delight that the two regions are able to participate in exchanges in a large number of fields including culture and sports, and that it is of utmost importance for both sides to work to be able to pass this partnership on to future generations. 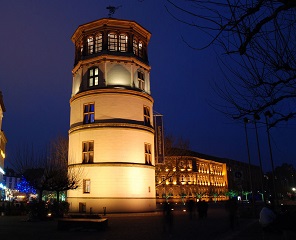 The historic "Schlossturm" which was the venue of the opinion exchange 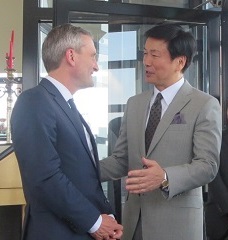 Meeting again with Mayor Geisel after one and a half years

Signing a Partnership Agreement (May 25)

Governor Morita signed a partnership agreement with Mayor Geisel in the presence of Mr. Iso, Consul General of Japan, members of the local Japanese community, KANAYA Seiichiro, President of the Japanese-German Association in Chiba, HASHIGUCHI Shohachi, honorary member of said Association, and others who have contributed to exchanges between the two regions. Mayor Geisel strongly stated that he would like to use the friendly relationship between the two regions up to this point as a base on which to deepen their partnership. A commemorative plate which will be placed along a road in the city was also presented. 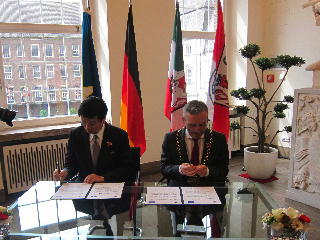 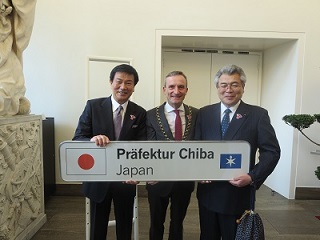 "Japan Day" is a large Japanese culture festival (the number of visitors this year was approximately 600,000 people), which has been held annually in May or June by the excutive commitee organized by the City of Düsseldorf, the State NRW, and Japanese communities there since 2002. Chiba Prefecture has been participating in the "Japan Day" every year since 2007 and has an information stand there every time.

This year, Governor Morita participated in the the opening ceremony with Mr. Yoshimoto. Also, the Governor made a speech and announced the signing of the official partnership agreement between Chiba Prefecture and the City of Düsseldorf. He was able to introduce Chiba's many charms to the visitors from Germany and other countries.

After the opening, the Governor guided Mayor Geisel and Consul General Iso to the Chiba PR booth. At the booth, supported by the Japanese-German Association in Chiba, the German-Japanese Association in Niederrhein, Reitaku University, Chiba University, and many other related agencies, Chiba Prefecture showcased the appeal of Chiba by exhibiting panels on exchanges between Düsseldorf and Chiba, airing a tourism PR video, and setting up corners for making origami crafts and trying calligraphy. Many visitors stopped by the booth, making it a great success. At the origami corner and the calligraphy corner, some enthusiastic German participants enjoyed making their own works. 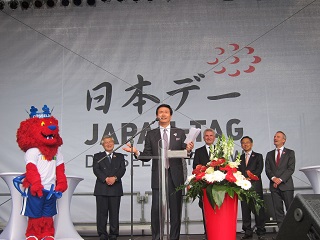 Speech by Governor at the opening ceremony 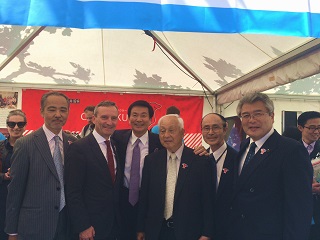 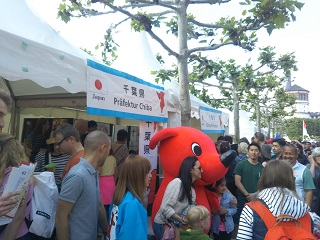 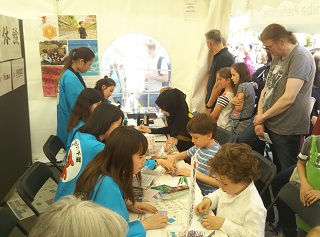 The Governor visited a nursing-care facility run by Diakonie Düsseldorf and interviewed staff and managers about the current situation and handling of accepting foreign care workers. 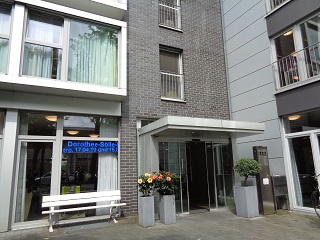 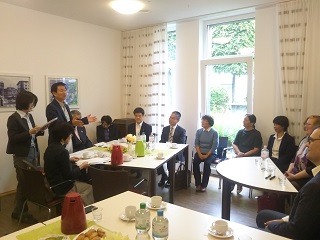 Four members of the U-14 tennis team, representing junior high schools in Chiba Prefecture, along with two coaches, visited Düsseldorf from August 4 to 10. They participated in the "Düsseldorf Friendship Cup 2019" hosted by the City of Düsseldorf. The tournament, with participation from players in the same age group representing the countries that similarly promote exchanges with Düsseldorf, aimed to deepen friendship through games and other events. 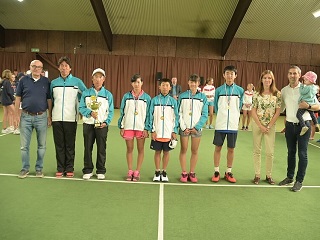 Commendation for the Chiba team 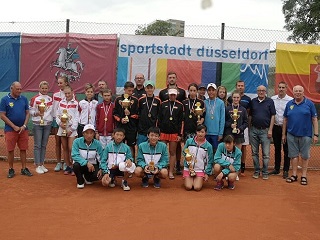 Mayor Geisel visited Chiba Prefecture on September 3 and met with Governor Morita in Chiba City. In their 5th meeting, they recalled the delight at the signing of their sister city agreement in May as well as confirmed that the two regions will work to further deepen the relationship. They also discussed possible exchanges that may arise through the 2020 Tokyo Olympic/Paralympic Games. 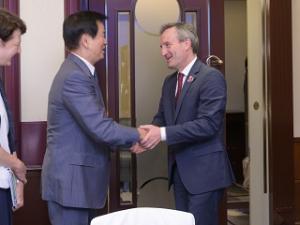 Greeting from the Governor 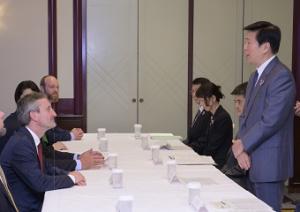 Meeting between the Governor and the Mayor

The organizations “Study Fund Düsseldorf-Japan in Düsseldorf” and “Study Work for German-Japanese Culture Exchange in NRW” sponsor a program in which selected candidates are sent to Japan every year to learn about different themes.
This year, a group of six visited Chiba Prefecture on September 3 and participated in a "Futomaki Matsuri Sushi" cooking class, which is a traditional local specialty. They also visited the Chiba Prefectural "Boso-no-Mura" and participated in a party hosted by Japanese-German Association in Chiba. During their visit, the study group deepened their understanding of Chiba's traditional culture and exchange between Japan and Germany. On the next day, September 4, they paid a courtesy call on Governor Morita. 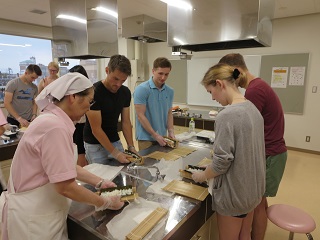 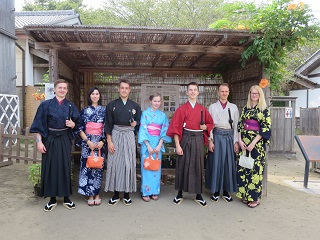 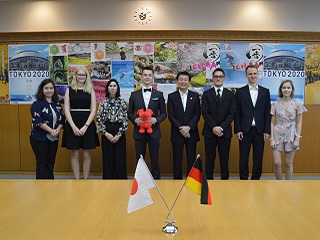 Three staff from the Sport Bureau and Communication Bureau of the City of Düsseldorf visited two sites in Chiba Prefecture, Tsurigasaki Beach in Ichinimoiya Town and Makuhari Messe in Chiba City, where Tokyo 2020 Games will be held. 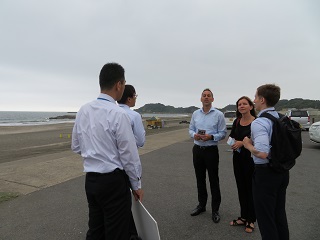 Staff from the Sports Bureau listening to an explanation of Tsurigasaki Beach, where Olympic surfing games will be held (2nd and 3rd from the right) 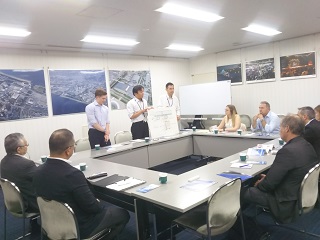 Explanation of Makuhari Messe, where 3 Olympic and 4 Paralympic games will be held

Co-hosted by NRW.INVEST and Messe Düsseldorf, the City of Düsseldorf organizes an exchange reception called “Düsseldorf Evening” in Tokyo approximately every three years. The reception aims to deepen ties by inviting a wide range of people involved in exchanges with Düsseldorf, including exhibitors and collaborators of trade fairs held in the city and former expatriates of companies with offices in the city.
In 2019, this event was held on September 5. There were about 1,400 attendees and it was a good opportunity to let people know more about the friendship between Chiba Prefecture and the City of Düsseldorf. 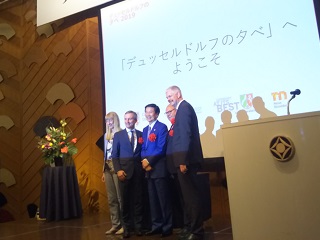 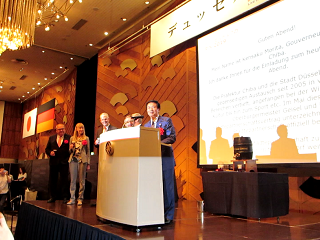 Eight members of the U-16 table tennis team, representing senior high schools in Chiba Prefecture, along with two coaches, visited Düsseldorf from October 23 to 30.
They trained and participated in a friendly competition with players in the same age group of the competitive Borussia Düsseldorf team and deepened friendships. 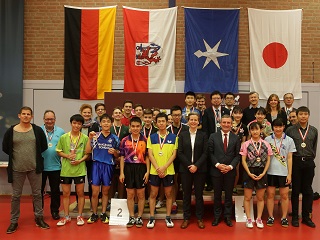 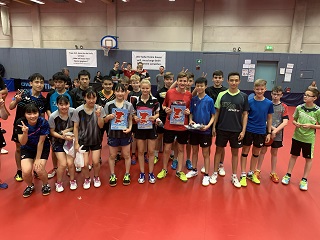 Four staff from the Commerce, Industry and Labor Department and Land Development Department of the Chiba Prefectural Government visited the Düsseldorf City Planning Bureau and other associations as part of their short term overseas training where they held an exchange of opinions regarding land use involving city planning methods and problems regarding attracting companies to their respective regions. 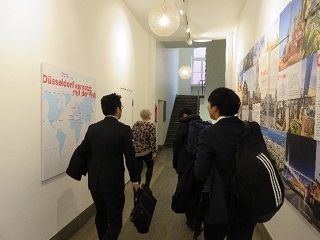 Commemorative photo with an official from Düsseldorf City Planning Bureau 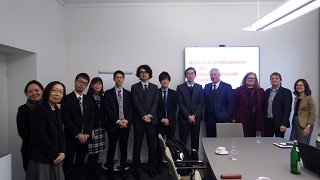 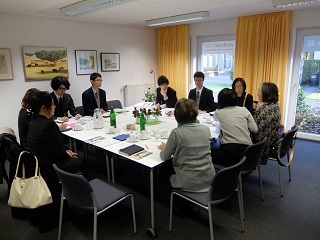 Chiba Prefecture received a donation from Düsseldorf’s citizens, companies, government etc. to Prefecture citizens who were affected by Typhoons 15 and 19 and the large rains brought by Typhoon 21 in 2019. For details, please see the page listed below.