Exchanges with Düsseldorf in 2016

Chiba Prefecture has participated in Japan Day since 2005 when the partnership between Chiba Prefecture and Düsseldorf first began. As in previous years, the prefecture prepared a Chiba promotions tent and introduced Chiba’s many charms together with the Japanese-German Association of Chiba, German-Japanese Association in Niederrhein and university students from around Düsseldorf. The Chiba promotions tent was busy with visitors the entire day. Many visitors participated in games of rock, paper, scissors, and made origami crafts.

Mr. Satoshi Katano, a flutist who plays the Sawara-bayashi, a type of festival music traditionally from the Sawara District of Katori City in northern Chiba, gave a surprise performance of Sawara-bayashi melodies. Many people stopped at the tent to enjoy his performance. Mr. Katano also entertained audiences with his on-stage performance during the Japan Day pre-festivities.
Additionally, we held workshops on Papier-mache Painting and gave participants a chance to try on the Samurai Armor that we had on display. Through cooperation with the Düsseldorf Stadtmuseum and Experience Museum Chiba Prefectural Boso-no-Mura, we were able to entertain many adults and children alike. 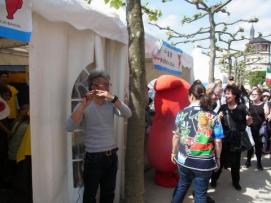 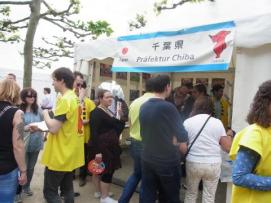 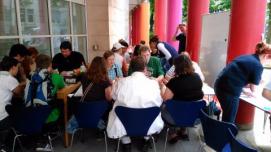 Workshop with the Düsseldorf Stadtmuseum

Governor’s visit to the Netherlands and Germany (July3-10)

Governor Morita visited the Kingdom of the Netherlands and the Federal Republic of Germany from Sunday, July 3 to Sunday, July 10, 2016.
In Germany, the Governor visited the City of Düsseldorf, which conducts exchange with Chiba Prefecture. There, Governor Morita met with Mayor Geisel, held discussions with economic businesses active and toured the Messe Düsseldorf facility. He also visited Düsseldorf’s professional table tennis team and promoted Chiba Prefecture as an ideal training camp location. 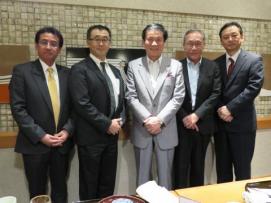 Governor Morita with the
meeting participants

Governor Morita visited Messe Düsseldorf, which is famous for being one of the most successful exhibition facilities in the world.
President and CEO Dornscheidt guided the Governor around the facility and explained the wide variety of exhibitions held there, including printing and medical equipment industries. He also covered efforts to make the facility accessible to people with limited mobility. 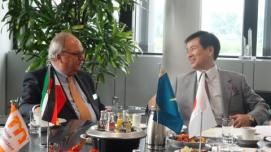 Meeting with President and CEO Dornscheidt 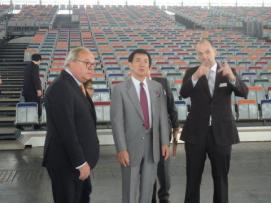 Meeting with the Mayor of Düsseldorf(July8)

Governor Morita met with the Mayor of Düsseldorf, Thomas Geisel, and discussed the development of exchange in a wide range of areas such as between museums and sports organizations.
In response to the Governor’s request for assistance in inviting the German table tennis team to hold their training camp in Chiba Prefecture, Mayor Geisel said he would do anything he could to support Chiba, the city’s friendly partner for over ten years. 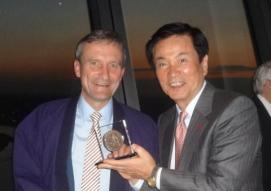 Visit to the Borussia Düsseldorf(July9)

Governor Morita visited and discussed sports exchange with the Borussia Düsseldorf, one of the best table tennis club teams in Europe that counts Olympic athletes among its members.
The Governor handed a personal letter to the German Table Tennis Federation and requested their cooperation in encouraging the 2020 Olympic and Paralympic German teams to hold their training camps in Chiba Prefecture. 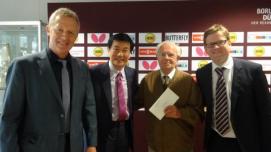 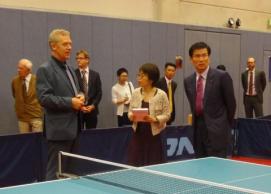 The U-16 table tennis team in Düsseldorf City, Borussia Düsseldorf, consisting of 8 junior high  students and 2 coaches, visited Chiba Prefecture from July 16-23. They strengthened friendships with athletes their own age by training together and through matches. 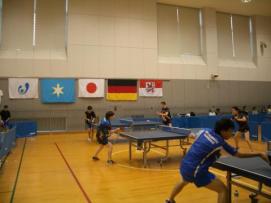 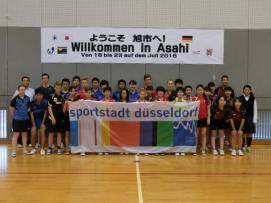 The organization “Study Fund Düsseldorf-Japan” in Düsseldorf and “Study Work for German-Japanese Culture Exchange in NRW” sponsors a program in which select candidates are sent to Japan every year to learn about different themes.
This year’s theme was "The Internationalization of Japan.” A group of 6 visited Japan in late August. On August 18, they visited Chiba Prefecture. They participated in a Futomaki-sushi cooking class, Sapporo Beer Brewery, and also participated in a party hosted by the Japanese-German Association of Chiba. During their visit, the study group deepened their understanding of Chiba’s traditional culture and exchange between Japan and Germany. 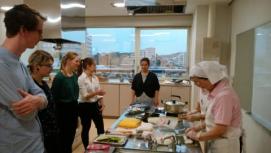 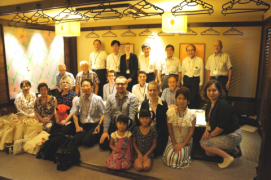