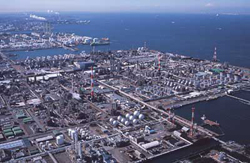 Up until the 1950s, the main industries of the prefecture were the brewing of soy sauce, sake and mirin (sweet cooking sake).

In subsequent years, the prefecture actively sought to attract big enterprises. After the Chiba steel plant of then Kawasaki Steel Corp. was constructed on a reclaimed site made off the coast of Chiba City in November 1950, other enterprises in the heavy and chemical industries poured into the prefecture and constructed their plants.

In the inland area, industrial parks are being developed taking the area's strengths into consideration, and the welcoming of leading-edge industries and growth industries is actively promoted. Currently, and various enterprises, including those in processing and assembly industries, are locating their facilities there.

The shipment value of manufactured goods made in the coastal areas constitutes 63.4% of the total, and that in inland area constitutes 36.6%. (Source: Commerce and Industry in Chiba Prefecture, 2012 Economic Census Results Revised Report, etc.)

Commercial business activities in Chiba Prefecture support the rich lives of our residents, and also play an important role in supporting the regional economy.

According to 2012 Economic Census for Business Activity Results, as of February 1, 2012, the number of retail establishments in the prefecture was 28,051 and that of employees was 244,939, and the total yearly sales amounted to 4,778.9 billion yen.

Moreover, looking at the ratio of stores classified by workforce size, small stores, with a workforce of 4 or fewer employees, account for 61.3% of the total. 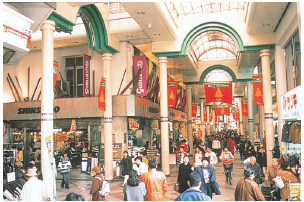 Chiba Prefecture, which has a mild climate and fertile soil, is one of the major agricultural prefectures in Japan. The agricultural output of the prefecture was 415.3 billion yen in 2012, which was ranked 3rd nationwide. Additionally, there are many items occupying the top position in production amount nationwide such as Japanese radish, and pears while rice, flowers and livestock also hold high positions across the nation.

The regions of Chiba and Higashi-Katsushika are very close to Tokyo, one of the biggest consuming regions. In these areas, komatsuna (Japanese mustard spinach) and spinach have been successfully produced taking advantage of their location. 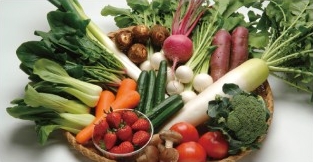 Various agricultural products from throughout the year

In the regions of Kaiso, Katori and Imba, cultivation of vegetables, such as cabbages, carrots and watermelons, as well as wet rice cultivation and dairy farming are popular.

In the regions of Sanbu and Chosei, wet rice cultivation, and greenhouse production of melons and tomatoes are popular.

In the Isumi region, the features of intermediate and mountainous areas are utilized. In addition to rice, staple such as bamboo shoots are actively produced as main products.

In the Awa region with its mild climate and bountiful nature, flowers such as carnations and stocks, and fruits like strawberries and loquats are actively produced.
In the Kimitsu region, cultivation of wet rice and vegetables, and dairy farming are carried out in good balance.

Chiba Prefecture is surrounded by water, with the calm water of Tokyo Bay on one side and the open Pacific Ocean on the other, giving it a rich range of fishing environments, and thus allowing a wide variety of seafood to be caught. The total volume of marine fishery and farmed fish in the prefecture was 173,320 tons in 2012. This makes Chiba one of the most important prefectures for fishing in the country, with the catches of sardines, anchovies, and perch being the highest nationwide.

By region, the seas off Choshi and Kujukuri are where the Kuroshio and Oyashio currents converge, creating a superb fishing area. The main catch here, using purse-seine fishing, is sardines, as well as flounder, squid, and other species caught using bottom trawling.

The Isumi and Awa regions have many shore reefs, and are rich in rock-living seafood, like abalone, turban shell, and lobster. Trolling is also used for bonito, while species like alfonsino, red sea bream, flounder, and squid are caught using small vessels or set nets.

In the Tokyo Bay regions, perch, flounder, conger eel, and other species are caught using bottom trawling, while clam, trough shell, and other shellfish are taken using diving apparatus or hand-gathering. Seaweed cultivation is also a major aspect. 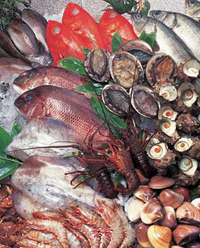