Exchanges with Düsseldorf in 2013

. OBIC Seagulls, a senior American football team based in Chiba Prefecture, visited Düsseldorf and had an away match with the Düsseldorf Panthers. They also visited the Japanese School and strengthened friendships with the local elementary and junior high school students.

The U-14 tennis team, consisting of 4 junior high school students from Chiba Prefecture and 2 coaches, visited Düsseldorf from May 19-27. During their stay, they participated in the International Friendship Tennis Cup organized by Düsseldorf City, and built friendships with young athletes from other countries. Each year, the Japan Day pre-festivities are held at the Echo Japanese Cultural Center in Düsseldorf the day before Japan Day. As in previous years, Mr. Satoshi Katano, a flutist who plays the Sawara-bayashi (a type of festival music traditionally from the Sawara District of Katori City in northern Chiba), participated in this year’s event. Mr. Katano played the shinobue or traditional Japanese flute and charmed the audience with his performance. Mr. Katano also gave a masterful performance on the main stage for Japan Day.

Chiba Prefecture has participated in Japan Day since 2005 when the partnership between Chiba Prefecture and Düsseldorf first began. As in previous years, the prefecture prepared a Chiba promotions tent and worked together with the German-Japanese Association in Niederrhein and university students around Düsseldorf to introduce Chiba’s many charms. The Chiba promotions tent was busy with visitors the entire day. Many visitors participated in games of rock, paper, scissors, and were interested in brochures about Chiba products and tourist spots. 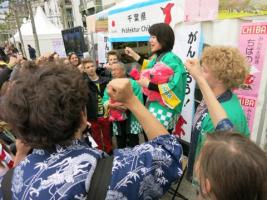 The U-17 Dusseldorf Girl’s Soccer Team, consisting of 15 students from Düsseldorf and 4 coaches, visited Chiba Prefecture from August 24-31. They strengthened their friendships with athletes their own age by training together and through matches. 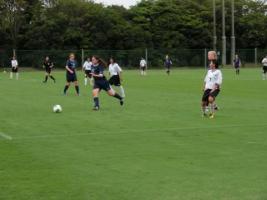 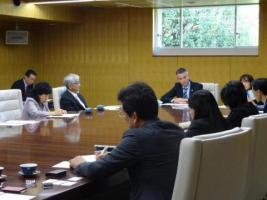 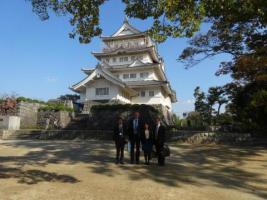